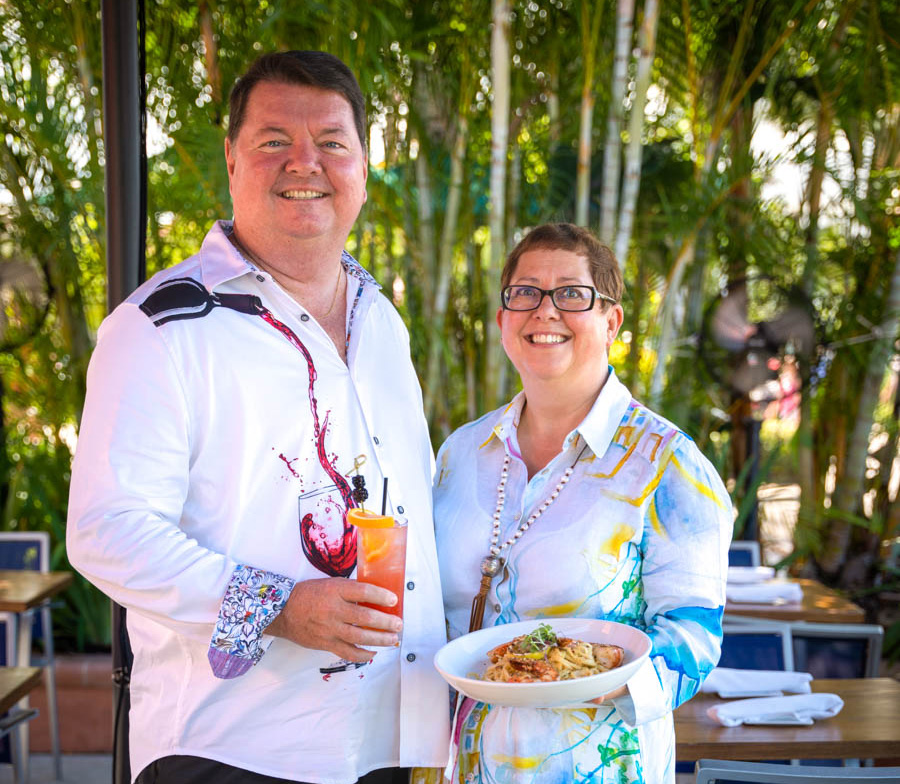 John Horne was driving on Gulf of Mexico Drive with his wife, Amanda, contemplating a major purchase. It was a chilly (for Florida) January day, and the gregarious restaurateur realized that the major investment he was about to make – a fine-dining restaurant with a 50-year history of delighting local foodies – is exactly what some of his industry buddies were leaving behind. Ray and D’Arcy Arpke were moving away from Euphemia Haye on Longboat Key after more than 40 years. Sean Murphy sold Beach Bistro after 36 years. JP and Shay Knaggs have moved on from downtown Sarasota’s Bijou Cafe after 35 years. It was a tough time in the restaurant industry, and it wasn’t going to get any easier. And yet, here is Horne, still the artist, still the optimist, a week away from entering the gastronomic fray. What did the others know that he didn’t?

“Have I lost my mind?” he asked Amanda. The purchase in question, of course, is the mainstay of St. Armands Cafe L’Europe. The storefront of the restaurant served as John Ringling’s sales office in the early days of Sarasota. Then, in 1973, Dutch immigrants Titus Letschert and Norbert Goldner opened a restaurant they hoped would bring fine European cuisine to locals and tourists alike. While countless restaurants have opened and closed around it, Café L’Europe has maintained its excellence. In other words, Horne wasn’t buying just any restaurant. After all, it’s where Arpke, Knaggs, Harry Christensen (of Harry’s Continental Kitchen fame) and countless successful local chefs got their start. This is Café L’Europe we are talking about. The Great Lady. Horne first viewed the property at 431 St. Armands Cir. in the early 1980s while working as a waiter at Fast Eddie’s on Anna Maria Island.

“Man, it was a treat to go there,” Horne says. “I remember going there with my family for my parents’ birthday. It was that special place to go. He even remembers what he ate. Had an snail appetizer (I loved it) and starter. . . duck. “I’m a duck nut,” says Horne, recalling the one dish that has remained on the menu for the entire existence of Café L’Europe. “I still remember eating duck there. It was so memorable. Unbelievable.”

It will be a delicate balance to marry this tradition – the special place to go – with the need to satisfy a changing population with changing expectations of gastronomy. Visit any major city and discover the trendiest gourmet restaurants. You see jeans. You hear rock ‘n’ roll, hip-hop. It’s strong. They are alters to foodiedom. Sarasota isn’t quite there yet, but its food scene is changing, okay. So what about Café L’Europe?

“I really felt like a steward,” Horne said of his eight months at the helm. “I felt like it was our turn to run this stunning property.”

If ever there was a restaurant owner up to it, it’s Horne. He’s a man who’s built an empire that includes four (soon to be five) Anna Maria Oyster Bar locations. A man who bet on himself in 1995 when he funded the first location on City Pier. A man whose restaurants are so famous that they are the acronym for a local household: AMOB. He knows this area and the dining wants and needs of his audience. Horne and his magnetic personality are as inescapable here as the restaurant he plans to transform.

To do that, he needs a chef who understands the delicate balance between exclusivity and accessibility. Enter Jose Cuarta. He was named executive chef after nearly three years in the kitchen of the Michelin-rated Oak & Ola hotspot in Tampa, where he studied under award-winning chef James Beard (and Emeril Lagasse protege) Anne Kearney. Intense and demanding, Cuarta’s passion is as evident in the way he talks about food as in the way he prepares it. He believes in minimizing dishes. Keep it simple. A balance of flavors. It’s an endless quest for culinary perfection. If there’s one ingredient that can be homemade at Café L’Europe, it’s good. The revamp of the lunch menu, which debuted last summer, set the tone for the restaurant’s future.

For the piece de resistance of his fried chicken sandwich, the Kentucky native turned his new office into a fermentation station. You will not find any files in the binder. You won’t find pens or paperclips in the drawers. You’ll find the key ingredient in the restaurant’s “bottom of the drawer sauce,” a tangy honey glaze with a special kick that comes from the fermenting jars of hot peppers, carrots, onions and more hiding in Chief Cuarta’s office.

Is the fried chicken sandwich typically European? Eh. Maybe not, but three distinct layers of crunch — toasted bread, pickled vegetables, and fried chicken breadcrumbs — pair perfectly with the spice and sweetness of the sauce. “That’s definitely where Kentucky comes in,” he admits. The evolution of the menu alone proves that this is not your grandfather’s Café L’Europe. There’s the L’Europe smashburger that – you guessed it – goes beyond what you thought a burger could be. It starts with the meat, which comes from the Providence Cattle Company of Tampa. When you eat the L’Europe Smashburger, you’re biting into premium, antibiotic-free, growth hormone-free beef that has never crossed state lines. This is decidedly, proudly Florida. The onion jam that gives it a distinct and unique umami kick? Maybe it’s European. Maybe it comes from a whole other plane of existence. Accompanied by smoked cheddar, homemade pickles, dijonnaise and the lightly toasted sesame bun, you’ll wonder if all those burgers you’ve eaten in the past were really burgers.

Fear not, the faithful of Europe, the favorites from across the Atlantic remain. Try the croque madame. We’re not talking Oscar Mayer deli ham here. It’s specially imported Jambon de Paris, melting Gruyère, béchamel, Dijon mustard and a perfectly fried egg. Remember when I told you Cuarta was a perfectionist? Sunny Egg is a nice, round, precisely cooked garnish that asks your knife and fork to do their job ASAP.

And the quiche? Let’s go. It is a light, fluffy and fluffy dream. The crust is buttery, flaky, but not too rich. The custard is firm and melty on first bite, set on a bed of salted bacon and caramelized onions, Gruyere cheese and a perfectly browned top. It’s unlike any quiche you’ve ever had, worn down by hours and hours of trial and error from Cuarta. He and his team landed on a process where they blind bake the pie crust, layer the custard over and over again. . . and another layer, until ready to slow cook for just over 40 minutes.
“I think it’s one of those dishes that simply translates,” Cuarta says. “It doesn’t matter how old or how young you are. It’s a good classic dish no matter who you are. You can taste the time it took to perfect it. And that’s just lunch. The dinner menu will see a similar revamp, but some Café L’Europe reserve dishes like the aforementioned duck will remain – but perhaps with a twist. “We’re in Florida,” Cuarta says, “so why don’t you duck the orange?”

Not only is he shaking up the menu, Cuarta is also busy perfecting his new colleagues. “What I really admire about him is that he teaches all the time,” says Horne. “He constantly shows a sous chef or a new chef or a new cook on the line, here’s what I do and here’s why I do it. The guy teaches 24/7.

THE PAST. THE PRESENT. THE FUTURE.

Café L’Europe has been the backdrop for half a century of celebrations. Fancy first dates, schmoopy proposals, countless birthdays, anniversaries, and happy moments. The backdrop itself will evolve with the menu. Expect a fully renovated interior this year that aims to reflect the restaurant’s culinary evolution while nodding to its elegant past. “Special” is a word that Horne returns to again and again when discussing Café L’Europe. Contemplating this first impression he had of the restaurant, he takes a moment, smiles. “You know,” he said, blue eyes lighting up. “It was just a great restaurant. Yeah. You can always count on it being just fabulous. It bet the same for diners in Sarasota. So, has John Horne lost his mind? Not if you ask him.