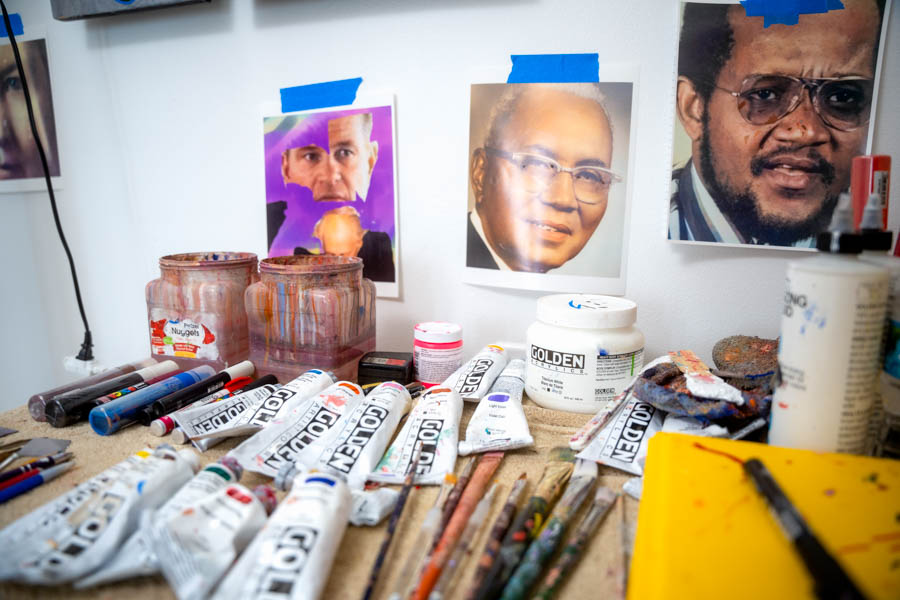 With each revolution of the sun in the waters of the Gulf, Sarasota’s history grows longer.

With each revolution of the sun in the waters of the Gulf, Sarasota’s history grows longer. It is not a story that lives through dates and timelines, through laws enacted, buildings constructed or businesses formed – it lives through people. Through the imprint they left on those around them, through their presence in the community, in the wake of our actions is the fabric of history. Each year passes and more people add to this story, until it becomes something much bigger than anyone could have imagined. In this growth, people become memories and many of them get lost.

In his next series at the Art Ovation Hotel, Sarasota Icons, Javi Suarez wants us to remember them. “The series includes some of Sarasota’s traditional icons, like Marie Selby and John and Mabel Ringling, but also some of the lesser-known people who include members of the Latino community and the African-American community such as John Rivers, Ed James and Buck O “Neil,” says Suarez. Suarez, an award-winning architect who balances being a contemporary artist with his full-time role as senior vice president of Suarez Architecture, moved to Sarasota from Puerto Rico when he was ten years old. While telling the stories of untold Sarasota icons, he also paints a portrait of his experiences as a first-generation immigrant.

JAVI SUAREZ WORKING IN HIS STUDIOS.

“The show has evolved to tell a bit of Sarasota’s story and tell my story at the same time. I see my experiences when we first moved here in the ’80s and Sarasota’s story differently as a adult, professional and father than I was when I was a child. The more I allow myself to try to put myself in someone else’s shoes and interact with other communities, the more I realize that there is a bigger story to tell,” Suarez attests.Some of the portraits that tell Sarasota’s larger story are those of the late Dr. Eugenie Clark, the “Shark Lady,” a pioneering marine biologist and one of the founders of the Mote Marine Laboratory and Dr. Manuel Gordillo, an infectious disease specialist at Sarasota Memorial Hospital leading the fight against the COVID-19 pandemic Other untold icons include Buck O’Neil, a native of Sarasota, the first African coach -American Major League re of baseball and John Rivers, a leader of the civil rights movement in Sarasota. “My inspiration was to create a bridge between different parts of our community – many people paved the way for what we know as Sarasota,” says Suarez.

Suarez’s paintings, however, should not be confused with traditional portraits. Much like the identities of their subjects, these portraits are multi-layered and complex – a compilation of digital images rendered on canvas and fused together by Suarez’s brushstrokes. “I start by compiling images of these individuals that represent them and tell a story in themselves and merge them. It is my own language that I have built over the years. I call it the in-between where you start layering the images where they literally interact with each other,” says Suarez. “Inside of that is a series of other layers that are more abstract and impressionistic that deal more with the moment of making and the process of it. There is a rational aspect in the paintings and then there is also a more emotional aspect,” he adds.
It’s a design language and artistic process that stems in part from Suarez’s love for the improvisatory nature of jazz music – while studying for his master’s degree in architecture at UCLA in 1997, Suarez focused his work thesis on the concept of jazz as a model for architecture. Therefore, his painting explored much of the same territory. Suarez’s ability to let go – to access improvisation, the intermediate state that makes his art his own – has developed over the course of his career. “All these ideas I had of jazz, improvisation and layering different pieces seeped into my work and became more and more refined over time as I felt more comfortable to feel free to let go,” Suarez says.