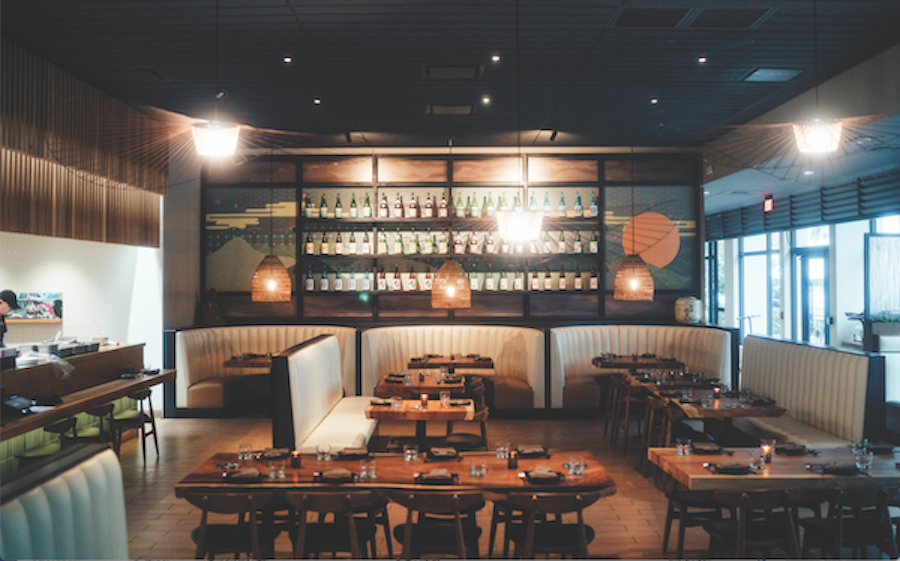 In Japanese, itadakimasu means “to receive humbly”. When pronounced before a meal in its purest sense, it takes into account all the elements, large and small, that contributed to a meal – the earth that produced the herbal garnish, the fish that provided the delicate meat and the chef whose efforts created the dish. The phrase prompts a diner to discern the constant buildup of subtleties in a flavor profile. And, in that state, Kojo, a new Asian fusion restaurant on Palm Avenue, delivers.

Handcrafted wooden furniture and wood carvings adorn the cabins along the bright row of windows.

A selection of small plates and bao rolls offers dishes to share that can be integrated into a sort of group tasting menu, or treated as appetizers. Yellowtail sashimi with jalapeÃ±o slices is served in a shallow bowl, with homemade ponzu at its base and cilantro sprouts as a garnish. The fish has a clean, lean taste, a perfect centerpiece for the sweet, salty and spicy tones coming from ponzu, amberjack and jalapeÃ±o respectively. While odd on paper, the tuna pizza shows the restaurant’s ability to balance creativity with accessible flavor. A thin, crispy tortilla is cooked to order and then topped with tuna sashimi, ponzu mayonnaise, truffle oil, sliced â€‹â€‹red onions and microgreens. It somehow manages to blend the flavors of Mexico and Japan with such harmony that it never clashes or feels unnatural.

With the hint of Mexican flavor in the tuna pizza, the mezcalero cocktail could provide a nice complement. Made with triple sec, Del Maguey mezcal, ginger bitters, and freshly squeezed grapefruit and lime juices, the cocktail is described by Roth as “a really juicy margarita.” What the quick mixologist misses with the description is the rich smoke and dryness of the drink that elevates it from an insane party punch to a more polished experience, albeit still heavily boozy. It should also be noted that Roth invented the drink and is credited as such in the Difford Guidebook.

To probe the depths of Lumpkin’s expertise as a sushi chef, an omakase (chef’s choice) plate of assorted nigiri delights in both presentation and precision. Serving the nigiri on a large terracotta plate cut in half by a lush green frond, Lumpkin forms the sticky rice into even mounds before coating each with thin, decadent slices of chilled fish. He then adds a hint of different flavor profiles for each fish for balance, like a smoked soybean and yuzu kosho for the red tuna toro, or a yuzu kosho aioli with Meyer lemon zest for the flambÃ© salmon.

Moving on to bigger dishes, Fried Rice with Shrimp, Bacon, and Kimchi offers a more forgiving fusion of cuisines than Tuna Pizza. Made with Nueske’s bacon, Gulf-caught shrimp and homemade kimchi, then topped with shallot and ginger oil, kabayaki, nori flakes, a fried egg and a drizzle of spicy gochujang sauce, it does not retain anything. It’s lively, yes, but it’s also as rich as the many Asian cuisines it borrows from while still being held up by the silky, smoky fat of the bacon. Each element always holds its own place, with the copious amounts of umami accentuated by the flavor, sweetness, and warmth of kimchi, gochujang, and ginger scallion oil.

A dish for the biggest appetites, fried rice with shrimp, bacon and kimchi is both fun and filling.

The accompaniment of a cocktail here depends on the objectives of the guest. If something salty and quirky is desired, â€œblack and goldâ€ is the way. Made with bourbon, Frangelico, honey and lemon, it then takes a drastic and all in all pleasant turn with the addition of sesame oil. A few drops of oil are added to the shaker and a few drops are added to the lemon wheel garnish to accentuate the nutty notes of the Frangelico and enhance the nutty tones, making this a truly singular concoction. If more accessible pleasure is desired, Roth does what he confidently describes as “the best sour Midori in the world.” Melon liqueur gives it the cartoonish green tint traditionally associated with the drink, while marine gin (57 percent alcohol by volume), lemon, bitters, a dash of lemongrass syrup, and togarashi add layers. of drought, spiciness and salty.

At the end of an evening in which such thoughtful food and drink has been consumed, the pre-meal supplication should be followed by a direct prayer addressed to the hands and minds of those who have it. made possible. The Japanese also have a word for it: gochisousama, which can be interpreted as “thank you for the party”.