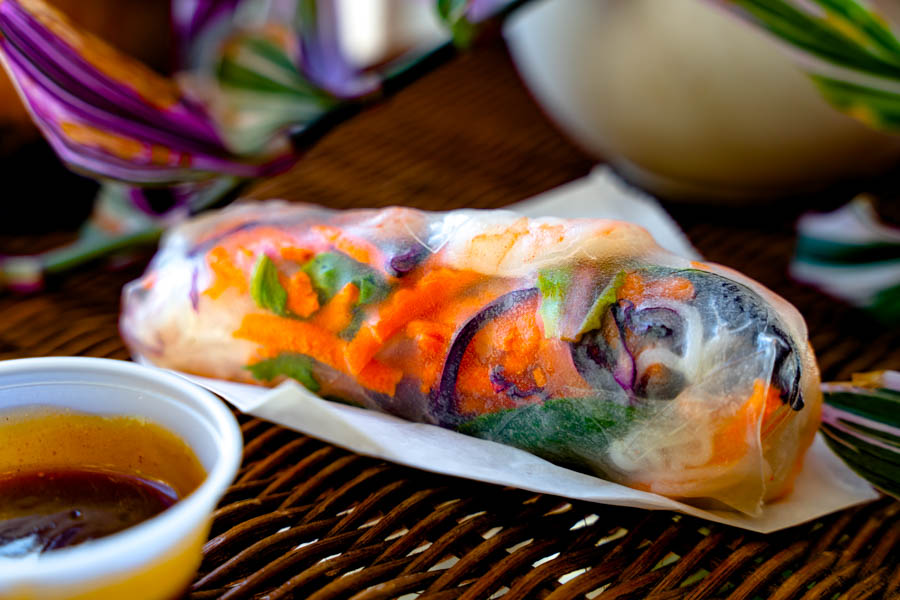 Nikki Lum-Kleiber and David Kleiber carry the torch of a family restaurant into the future. Photograph by Wyatt Kostygan

It’s hard to imagine a more loaded question than “what do you want to be when you grow up?” Parents want their children to climb the mythical ladder of upward mobility, believing that their children’s lives will be easier and more fulfilling if they could simply follow the advice of their dear old mom and dad. This is especially true in the restaurant industry, where nights, weekends and holidays offer no quarter of the toil of a hot kitchen. What if the family restaurant was already successful? And if the children felt at home there? What if they had some exciting new ideas to move the restaurant forward into the future? These questions are answered at Stiks.

THE FRESH ROLL SHRIMP IS BRIGHT AND DENSE, WITH A NICE ACCENT OF MINT COMPLEMENTING THE PEANUT SAUCE

Occupying the former A Taste of Asia space on Tamiami Trail, owned and operated by Lam and Selina Lum for over a decade, Stiks is the freshly updated concept of daughter Nikki Lum-Kleiber and son-in-law David Kleiber . Rather than completely reinventing the menu, the budding married couple turned it into a set of brighter, more health-conscious and customizable offerings loaded with gluten-free, vegan and vegetarian options. What they’ve reinvented is the way food is delivered, adopting a fast-casual model to go along with the hip decor that makes the space feel more like an airy lounge than a sit-down restaurant. .

THE LAO CURRY NOODLE SOUP THAT PUT A TASTE OF ASIA ON THE MAP IS RETURNING AS A CUSTOMIZABLE DISH THAT NOW COMES AS A VEGAN OPTION.

The most pressing concern for anyone savvy enough to have incorporated A Taste of Asia’s Lao Curry Noodle Soup into their cooking routine is whether or not the dish has disappeared into the modernized concept. Don’t worry: the soup stays. “It was by far one of the most popular dishes on A Taste of Asia,” says Lum-Kleiber, “so there was no way to get rid of it.” Brimming with aromas of lemongrass, the coconut milk broth has enough of the homemade red curry base to excite the taste buds with a smooth, well-balanced heat. Green onions and cilantro enhance the earthy tones, while rice noodles, bean sprouts and purple cabbage fill it up in a hearty bowl of everything delicious from Southeast Asian cuisines. Stiks has, however, made a thoughtful addition to Lum’s original preparation, offering both a vegan version (with vegetable broth) and a non-vegan version (with chicken broth). To top it off, diners choose between meat protein, vegan protein, or shrimp.

GLASS SWEET POTATO NOODLES PROVIDE A STARCHY BASE FOR THE DELICIOUS FLAVOR OF WOK SAMPLES.

For noodle lovers, a wonderful Pad Thai offers something familiar and perfectly acceptable when you don’t want to get bogged down in all the delicious permutations available on the menu. Sweet potato noodles, on the other hand, are more like an event. Thin sweet potato glass noodles – so called because of their transparency – are sautéed with onion, scallion, cilantro and bean sprouts, along with dinner’s choice of protein. The aroma itself immediately whets the appetite, a feature of seared onion that seems almost as paramount as grilled meat. Dense and hearty, the noodles alone add a lot of weight to the dish which seems at odds with the small take-out container it sits in. But, when buying something other than soup, Stiks offers the option of small fries chicken pieces as an addition. Rest assured, no meat is needed for this meal to split in two, but it is freshly fried chicken.

A nam sod chicken is about as bright and energetic as a top 40 on the charts. Made with diced chicken, julienned ginger, onion strips, scallions, peanuts and cilantro, the entire collection of chunks are tossed in a zesty, flavorful mix of lime juice and sauce of fish. Similar in flavor profile to Peruvian ceviche, this fresh and perky meal leaves a lingering fullness due to its high protein composition. Likewise, the fresh shrimp roll packs a lot of bright flavor into a seemingly small dish that belies his long sense of accomplishment. This luminosity mainly comes from the fresh mint leaves inside the sticky rice paper, while the prolonged feeling of satiety comes from the shrimp and rice noodles inside.

But, if one dish truly exemplifies how young restaurateurs have found ways to freshen up age-old dishes, it’s Orange Chicken and Orange Tofu. Listed in the “sweet and sticky” section of the menu, fried chicken pieces or fried tofu cubes are tossed in an orange sauce that bursts with real orange flavor (the Kleibers use copious amounts of zest orange) while retaining that familiar stickiness that makes certain sauces a guilty pleasure. Of course, it’s also nice to bite into a piece of lightly breaded chicken at Stiks and immediately go for the meat rather than wondering if the piece is really just a piece of breading like in many joints. to take away.

For a sweet and fresh treat, Stiks offers an assortment of Southeast Asian staples like Thai iced tea and boba. Taro boba, purple and silky as a satin pillowcase, tastes like cereal milk infused with an earthy electrolyte drink, a combination that sounds odd on paper but is a joy in practice. A brown sugar black tea boba, however, is truly exceptional. The combination of caramelized sugar with the slight bitterness of black tea makes this boba a case study in how to mix opposites. While it’s helpful that both flavors reside in a rich, creamy base, it’s still a nifty invention with beautiful results.

Returning to the original set of questions, we find optimism and promise. As the Lums pass their heritage on to a second generation, the familiar flavors remain. But those flavors have been adapted to the modern fixation on dietary designations and clean eating, as well as the “new normal” requirement that a restaurant be nimble, adaptable, fast-paced and laid-back. At Stiks, the children are doing very well.