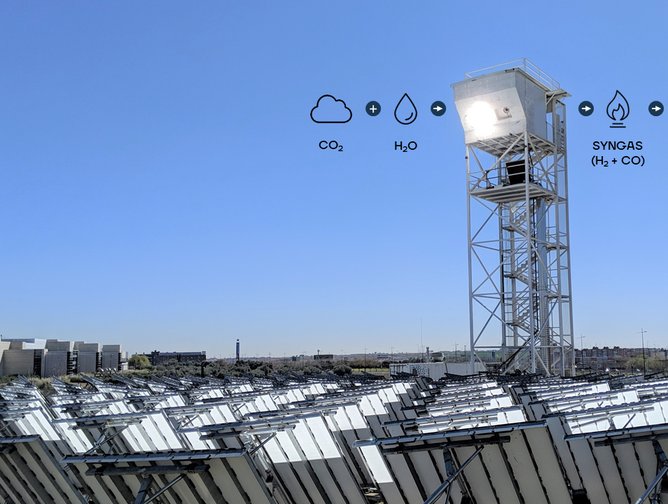 How is syngas made?

Synhelion uses solar heat to convert CO2 into synthetic fuels. When the sun is shining, the solar radiation is reflected by a mirror field, focused on a receiver and converted into high temperature process heat. The heat generated is routed to the thermochemical reactor which transforms the CO2 and H2O into syngas, a mixture of H2 and CO. The syngas is then transformed into fuels by standard gas-to-liquid technology such as the Fischer-Tropsch process. Synhelion’s technology makes it possible to produce any type of hydrocarbon fuel: jet fuel, gasoline, diesel.

Synhelion has developed thermal energy storage, so that fuel can be produced around the clock and high plant availability is guaranteed. This means that the company will be able to offer solar fuels at prices competitive with fossil fuels. Thermal energy storage is much cheaper and greener than battery storage.

A key advantage of solar fuels is that the technology to produce them does not compete for arable land with agricultural demand and has a smaller land footprint than other synthetic fuel technologies. It requires desert areas with lots of sunlight. These lands are available in many parts of the world. This means that it is possible to scale technology and meet global fuel demand, increase access to clean energy and reduce energy dependence.

Last year, Synhelion raised 16 million Swiss francs in its Series B. Co-founder and CEO Dr. Gianluca Ambrossetti announced the following plans for the company: “We are using this funding to build the world’s first utility-scale solar in the world at Brainergy Park. Jülich in North Rhine-Westphalia, Germany. We will start producing solar jet fuel there next year.”