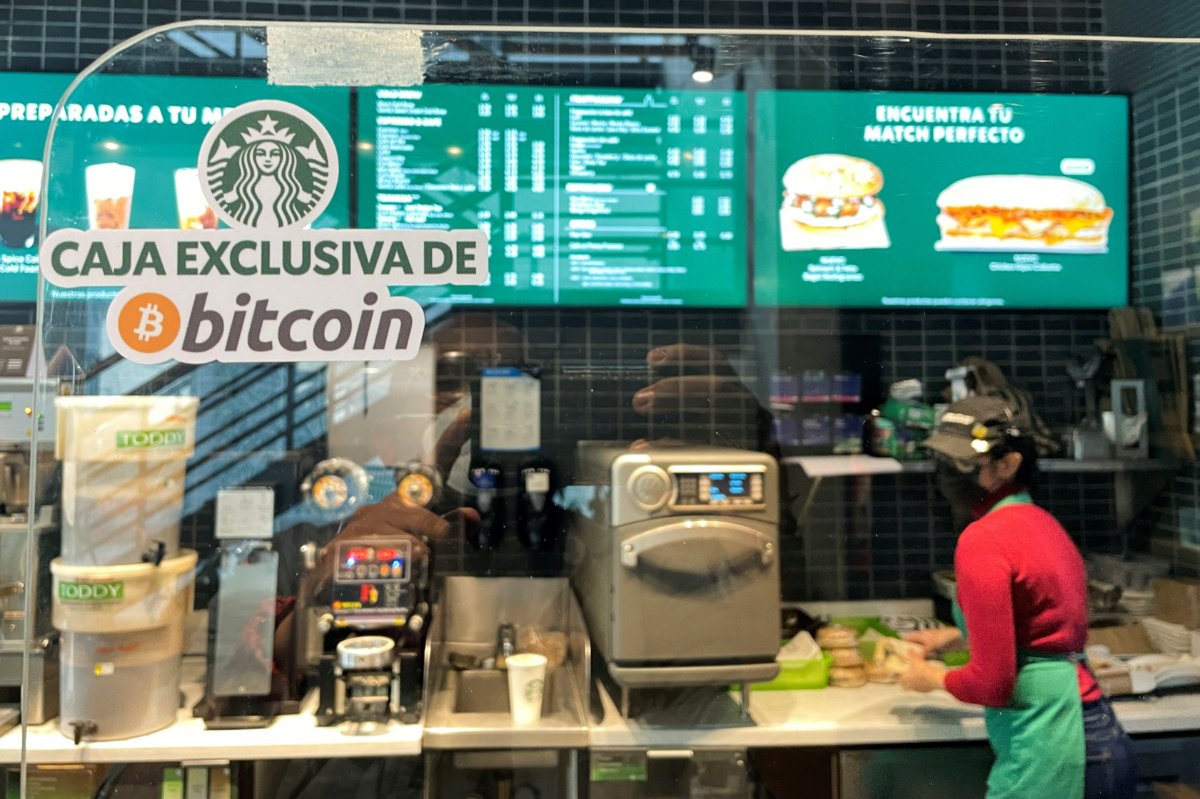 Bertila Garcia has set up her snack stand in the same corner of the Salvadoran capital for four decades – never accepting anything other than cash as a form of payment. Even though her country is making history by adopting bitcoin, she has no plans to change.

This month, the Central American country became the first in the world to adopt cryptocurrency as legal tender, but many ordinary Salvadorans, like Garcia, 65, are struggling to understand how this step could affect their families. means of subsistence.

A sign reads: “Exclusive Bitcoin register” at a Starbucks store where cryptocurrency is accepted as a method of payment, in San Salvador, El Salvador, on September 7. Photo: Reuters / Jose Cabezas.

Although she wanted to use cryptocurrency, Garcia does not own a smartphone and said she has no other way to download the government-launched “Chivo” app and bitcoin wallet.

So far, around a quarter of El Salvador’s 6.4 million people use Chivo, the country’s young president Nayib Bukele said in a September 20 tweet.

Bukele, 40, says bitcoin will help Salvadorans save some $ 400 million in annual remittance commissions, but experts cite concerns over data privacy and price volatility, warning that the elderly in particular could be left behind.

As part of the reform, businesses are to accept bitcoin payments alongside the U.S. dollar, which has been El Salvador’s official currency since 2001.

On the Pacific coast, some tourists and young restaurateurs and hoteliers have been using digital currency for up to three years. Shops in the surf town of El Zonte – known as Bitcoin Beach – display signs that say “We accept bitcoin”.

Elsewhere, long queues can be seen outside government-installed bitcoin ATMs where people can exchange their cryptocurrency for dollars, although some may be waiting to receive a bitcoin bonus of $ 30. US $ for all those who register for Chivo.

People wait for help using bitcoin outside an ATM at Chivo, a digital bitcoin wallet that the Salvadoran government launched for the use of cryptocurrency as legal tender, in Santa Tecla, in El Salvador, September 8. PHOTO: Reuters / Jose Cabezas

Bukele announced the adoption of bitcoin as a way to boost economic development by making El Salvador less dependent on the U.S. dollar and improving access to financial services for people who do not have a bank account.

But securing the use of the Chivo wallet could prove difficult for older people and those living in rural areas, where there are few ATMs, limited internet access and a strong cash-in-hand culture.

About half of Salvadorans do not have access to the internet, according to the World Bank.

The country’s poorest people and those – like Garcia – who don’t own smartphones or lack digital literacy skills might also find it difficult to make the leap, cryptocurrency experts said.

â€œBitcoin is not an easy technology to adopt … especially for the elderly looking to receive remittances. It will face many obstacles in getting people to adopt it,â€ Jean said. -Paul Lam, Associate Professor at the Canadian University of Waterloo.

THIS MESSAGE IS EASY TO IGNORE. BUT PLEASE …

Unlike many news agencies, we have not erected pay walls. This ensures that our content can be freely viewed by anyone, regardless of their economic status. Instead, Sight relies on our readers around the world for financial support as part of a compensation model that you can. But did you know that less than one percent of those who visit Sight each month to read our coverage give us financial support?

We desperately need your help so that we can continue to bring you our independent news and coverage issues from around the world with a Christian perspective. We have a range of options, depending on what you can afford. They start at just $ 1 per month, but for those who can afford it, we ask that you donate $ 10 per month (that’s less than the price of a cup of coffee per week). Go here to donate now – www.sightmagazine.com.au/subscribers. And for those who donate over $ 26 a year, we’ll send you a free copy of Paul Clark’s book, Living life at the top: 100 thoughts on an abundant life!

We are looking for 100 new financial supporters in the last 100 days of 2021 – so if you are not one of the few who are already supporting us, please become a monthly supporter now so that we can continue to inform, challenge and inspire people correctly. . worldwide.

Please make today the day you are with us.

The deployment of bitcoin in El Salvador is a “little lab experiment that other countries are watching,” said Lam, who is also a research advisor for Goodlabs Studio, a software company.

The potential savings of millions of dollars in commissions for remittances sent by Salvadoran migrants was another pillar of Bukele’s pro-bitcoin campaign.

Remittances from abroad – mostly from the United States – accounted for more than 25 percent of the country’s gross domestic product last year, according to the World Bank.

In northeastern Morazan province, Israel Marquez, 53, said he received $ 100 from his brother and a friend living in the United States several times a year, but was reluctant to test bitcoin.

â€œSome people say they’ll just download the Chivo app to spend the US $ 30 and then turn it off. But I didn’t even want to do it,â€ he said from the agricultural-majority province.

A person holds a sign reading “The Bitcoin Bill must be repealed, it will bring more corruption and poverty”, as people take part in a protest against the use of Bitcoin as legal tender, in San Salvador, El Salvador , September 7. Photo: Reuters / Jose Cabezas.

Suspicions about bitcoin are rife in El Salvador, according to a poll conducted in August by the country’s Central American University.

Of the 1,281 people surveyed, nine in 10 said they did not have a clear understanding of digital currency, while eight in 10 said they had little or no confidence in its use.

During anti-government street protests on September 15, some protesters carried banners saying “No to Bitcoin” and a bitcoin machine was set on fire.

Marquez, a small coffee producer, cited bitcoin’s volatility as one of his biggest concerns.

“I don’t understand how a currency raises so much price … it’s confusing,” he said.

“I don’t understand how a currency raises so many prices … it’s confusing.”

– Israel Marquez, a small coffee producer in the northeastern province of Morazan.

â€œSalvadorians are probably not sufficiently familiar and comfortable with online technology to trust cryptocurrencies,â€ he added.

She said the rapid adoption meant the government had little time to forge a regulatory framework and protect the personal data users pass on to create their Chivo wallets.

â€œHow will this information be stored, who will have access to it and what can it be used for?â€ Said Yansura, the group’s program manager for Latin America and the Caribbean.

A customer pays for a pizza with Chivo Wallet, a Bitcoin wallet that the Salvadoran government is launching for the use of Bitcoin as legal tender, at Perronas Pizza in Apopa, El Salvador, on September 9. Photo: Reuters / Jose Cabezas.

Ultimately, the extent to which Salvadorans embrace bitcoin in their day-to-day lives depends on whether cryptocurrency markets become less volatile, Monaghan said, adding that “the government can’t do much – thing to reduce the volatility of bitcoin “.

In downtown San Salvador, Pedrona de Saldana, 65, who sells sweets and cosmetics at a roadside stall, has vowed to stick with cash. Like Garcia, she doesn’t have a smartphone.

â€œI’m not going to use it even if I had another type of phone,â€ she said, accepting two quarters from a customer buying gum.

“I can’t use another currency that I don’t know.”