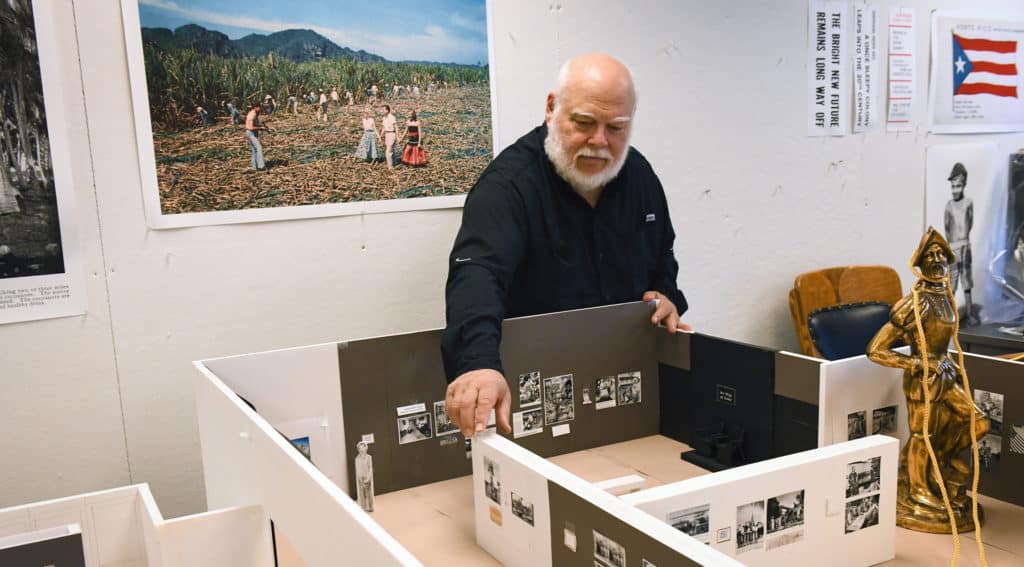 The non-profit history magazine Connecticut Explored has included Trinity faculty members and projects among its new list of “Game Changers” advance the study, interpretation, and dissemination of Connecticut history.

To mark its 20th anniversary, the Board of Directors and staff of Connecticut Explored launched an initiative, supported by a Connecticut Humanities Planning Grant, to find the people and projects leading the future of Connecticut history. From a pool of 120 nominations submitted by members of the public in fall 2021, an advisory team selected 20 Game Changers, including Charles A. Dana Professor of Fine Arts Pablo Delano and a project led by the professor of educational studies Jack Dougherty.

Also on the list were the Hartford Heritage Project and the Hartford History Center, both of whom have partnered with Trinity faculty and students on various initiatives through the college’s Center for Hartford Engagement and Research. The work of Game Changers will be highlighted in a variety of ways over the coming year: in the pages of Connecticut Exploredon the “Grating the Nutmeg” podcast, or via public programs.

Hermès told the running, “We are a history magazine. We want to tell the whole story of Connecticut. We are motivated to include people who have not been included before and to represent the diversity of our state geographically and in terms of people and institutions… They are doing new things, and by doing new things, they get the story that will be the future of Connecticut’s historic company.

Read more about the Trinity winners below:

Pablo Delanovisual artist, photographer, and educator, is recognized for his use of Connecticut and Puerto Rican history in his work, including his 2020 photography book, Saw Hartford (Wesleyan University Press), 2021 Connecticut Book Award finalist “Spirit of Connecticut”. Delano, who was born and raised in Puerto Rico, has seen his work featured in solo exhibitions at museums and galleries in the United States, Europe, Latin America and the Caribbean. He is the Charles A. Dana Professor of Fine Arts at Trinity College.

Over 20 years, Delano has amassed a significant archive of artifacts related to a century of Puerto Rican history. Using this material, including three-dimensional objects, newspaper clippings and photographs, he created The museum of the former colonya dynamic, site-specific art installation that examines the complex and turbulent history of American colonialism, paternalism and exploitation in Puerto Rico.

To learn more, visit pablodelano.com. Delano will be featured in a conversation with public historian Elena Rosario on September 21, 6:00-8:00 p.m., hosted by the Hartford History Center at Park Street Library @ The Lyric, 603 Park Street, Hartford, and in a “Grating the Nutmeg” podcast which will be released on January 1, 2023.

Online: How schooling, housing and civil rights shaped Hartford and its suburbs is an open-access, digital-first ongoing book by Jack Dougherty and contributors to Trinity College. It is available online, and a finished manuscript is under contract with Amherst College Press. The book combines historical narrative, interactive maps, and video interviews to tell the story of the school and housing frontiers that have shaped American metropolitan life over the past century, as well as the civil rights struggles of families and activists to cross, redraw or erase these powerful lines. Dougherty is professor of educational studies at Trinity College; the book’s contributors include many of his former students and research collaborators.

Set in the city of Hartford and its emerging suburbs, the book explains how this metropolitan area has become one of the most racially and economically polarized regions in the Northeastern United States. The story highlights how white middle-class government, business and families drew lines to distance themselves from others, and the evolving coalitions that sought to reform the relationship between private housing and education public.

Read the book on OnTheLine.trincoll.edu. On the line will be featured in a story in the Spring 2023 issue of Connecticut Explored.