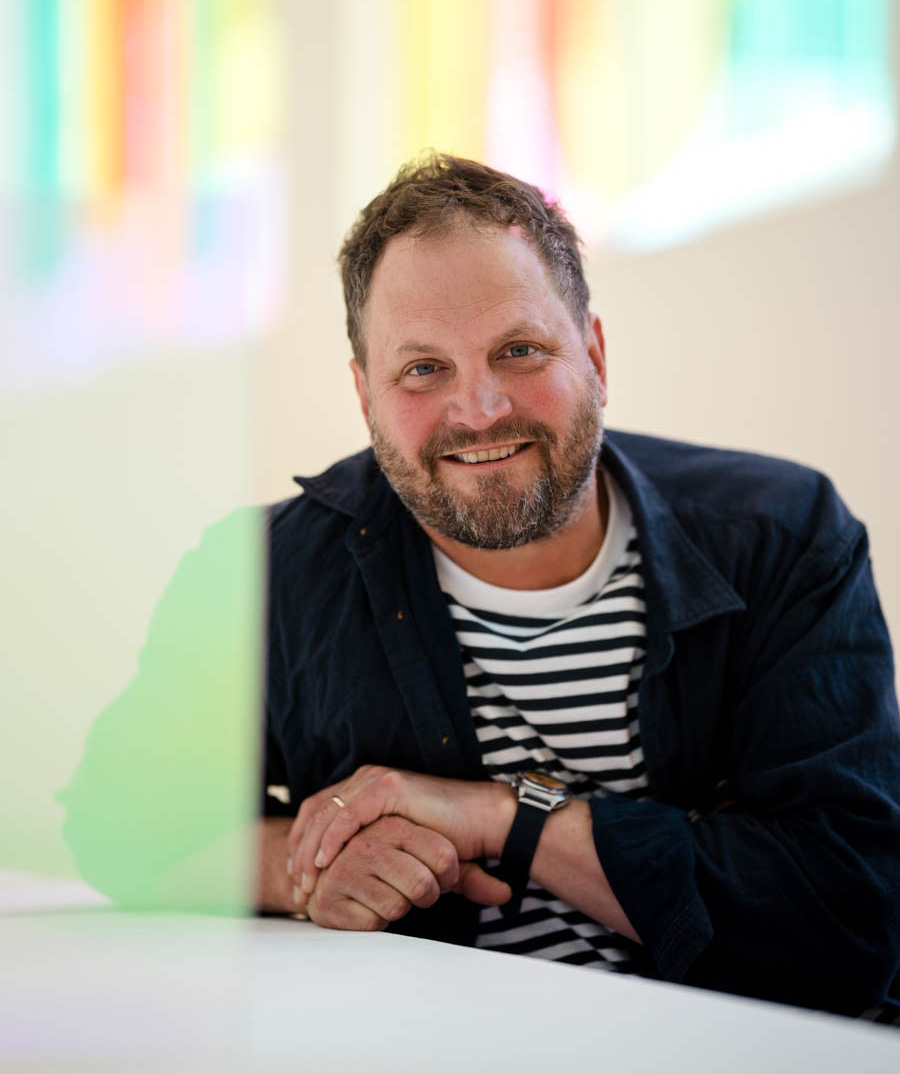 For Sarasota-born artist Christian Sampson, his life is always on the move. It’s been that way since he was a young boy, cruising the waters of Sarasota Bay and has been on the move ever since – from his time at Ringling College of Art and Design to decades in New York as a contemporary artist on his recent move to Los Angeles. Although Sampson, who specializes in color light projection, has made a career out of moving with light, he still brings pieces of his hometown with him. Now, with his Vita In Motu exhibit, a permanent fixture of the Sarasota Art Museum (SAM), part of Sampson, will forever be fixed in Sarasota. “Growing up here is a real honor to have a permanent work in my hometown,” says Sampson.

Sampson’s 2019 installation Vita in Motu – or “life in motion” was created for the Sarasota Art Museum’s inaugural Color exhibition. The theory. & (b/w). The installation, which can be seen in the museum’s third-floor Jonathan McCague Arcade, uses the building’s architecture to create an ever-changing light show – sunlight pours through the wide lens-covered windows of the corridor, on dichroic film sculptures, which project light onto the walls, floors and windows of the space. The installation is more of an experience than a ‘traditional’ art exhibition – as the sun goes down throughout the day, eventually to be replaced by colored LED lights to create projections from the sculptures, the viewer can witness the art change in real time. “When art works, it allows the viewer to interact with the work individually. I want to create a sensory piece that allows the viewer to let the colors evoke emotions, feelings, experiences. I want them to be able to formulate their own experiences to these elements,” says Sampson.

Sampson was approached to create an installation for SAM’s 2018 opening after then-SAM director Ann Marie Russel visited his studio in New York. Sampson’s approach to the project, like his approach to much of his work, was site specific. “As the museum was finishing up and opening, she said they had this space with these windows with lots of light that could be good for an exhibit. I did a tour, brought some samples, and I started experimenting with how the path of the sun passed through windows and floors. I was trying to think of a way to integrate windows and space to have something dynamic and interactive that would involve both the viewer and allow the natural beauty and light of Florida to pass through and strike these sculptures,” says Sampson.

Although Sampson’s work is decidedly contemporary in style, his methodology works similarly to that of an artist in a more traditional medium, such as a painter. “I’m still thinking about how to animate this space to make it an interactive installation and create something that is 1 plus 1 equals another dimension? It’s like a blank canvas, and then I use the light as a paint box to paint that space,” says Sampson.

While light is Sampson’s brush, his palette stems from a fusion of childhood experiences and formative years on the west coast of Florida. Her time at Ringling College of Art and Design to earn her BFA particularly impressed Vita In Motu. “I worked for years at Ca’ d’zan and the way the sun filtered through the stained glass windows reminded me of this installation. My job at the Ringling was to change the light bulbs that had burned out on the paintwork. I was noticing all the different color ranges in the kelvin scale and how they affected the paints differently,” says Sampson.

The vivid pinks, blues and yellows so prominent in Sampson’s work are reminiscent of the vibrant natural colors found in Florida. “I grew up on the water. I remember being transfixed by the coral reefs the first time I went snorkeling when I was five years old. The lights and colors of the environment shaped my youthful palette. In Vita In Motu I was mostly trying to highlight that bright blue sky that gets a lot of clouds – I was trying to layer those colors so you get that reflection and projection that gives those clouds those shapes and at the same time is multidimensional,” says Sampson.

From New York to Los Angeles, Sampson’s career has taken him across the country. Through his work, however, the colors of Florida’s Gulf Coast – of his home, of his childhood, of his inner brushwork – will survive no matter where they are.