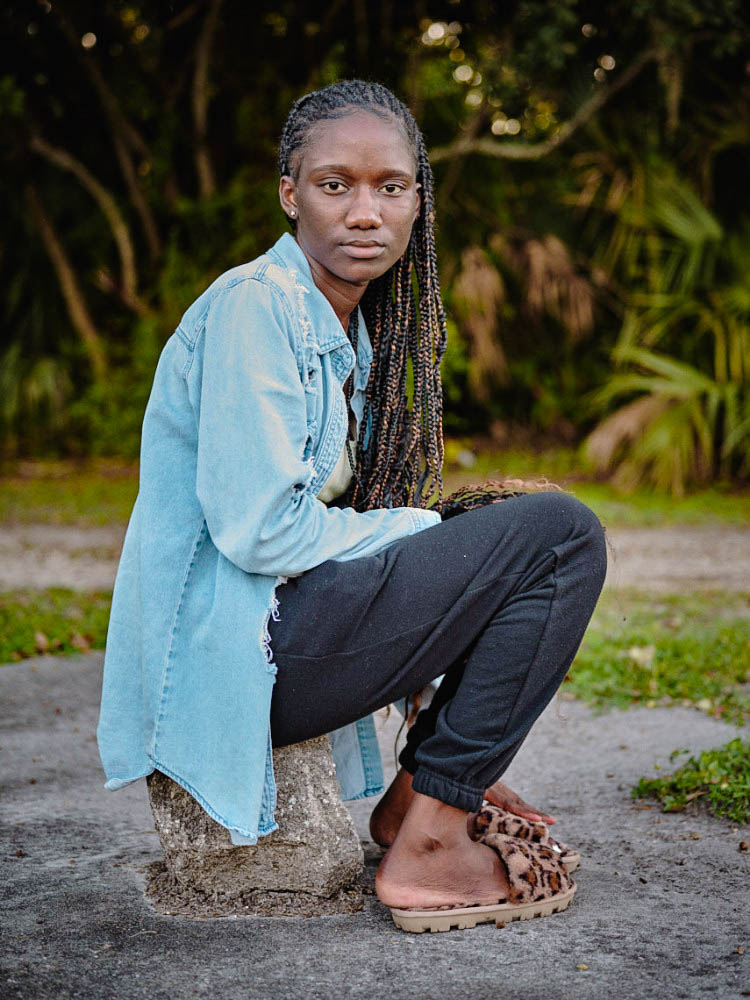 Meet Susan Sidebottom, the photographer putting a face to Sarasota’s affordable housing crisis. A humanist artist who aims to capture the relationship between people and their circumstances, Sidebottom has been recognized for her photos depicting those who struggle, such as the housebound elderly and the homeless. In her photo essay, “Suspended in the Balance,” she focused her lens on food insecurity in Iowa, trying to show the emotional trauma that occurs in people deprived of the basic necessities of life. When the Gulf Coast Community Foundation decided to shine a light on the affordable housing crisis in Sarasota County, they knew Sidebottom would be the perfect storyteller. Originally from North Carolina, Sidebottom, a mother of four, now lives in New Jersey. Always looking for places where there is a real diversity of thought and experience, she was drawn to Sarasota and didn’t hesitate when the Gulf Coast Community Foundation approached her to sponsor her exhibit.

“A PLACE IN THE SUN” IS ON DISPLAY AT THE SARASOTA ART CENTER, 707 N TAMIAMI TRL. UNTIL APRIL 30. PART OF THE PRODUCTS OF THE EXHIBITION, DONATED BY SIDEBOTTOM AND ART CENTER SARASOTA

A housing crisis is usually not a priority when one thinks of Sarasota with its luxury homes and modern buildings. But finding affordable housing in this region is a challenge that so many people face on a daily basis. According to Jon Thaxton, senior vice president for community investment at the Gulf Coast Community Foundation, there are 172,600 households in Sarasota County. Of these, more than 60,000, or more than 40%, spend more than 30% of their income on housing, which means that every month 60,000 households do not pay a bill and must decide which bill they will not go to. not pay. Pay. “The people most affected are our service workforce, people working near and just above minimum wage,” says Thaxton. “And of course that service workforce is in the tens of thousands of people and those are the people who ensure the quality of life that we enjoy in Sarasota. They are the ones who mop the floors, clear the tables, do the dishes, clean our swimming pools and mow our lawns. So without them, we don’t have the same quality of life. We must all agree as a community that affordable housing for our workforce is a necessity. It is no longer a luxury. It is no longer just a moral imperative. It is an economic engine. »

Susan Sidebottom wanted to make these challenges more personal by telling individual stories through photographs. His new exhibit, “A Place in the Sun” at the Art Center Sarasota features 25 photographs of real local people struggling or lacking affordable housing and basic needs. Its aim is to offer a deeper understanding of the connection between people and their situation.

“I hope people will come and have an emotional reaction to the work. You can’t predict what it’s going to be because it’s going to be different for everyone, based on their own personal experiences,” she says. “But hopefully they’ll start thinking about the people they’re looking at and maybe they’ll think… is my dry cleaner one of those people?” Is the person who serves me in the restaurant one of these people? And then they leave and they start thinking about how they can be part of the solution.

With all of her photos, Sidebottom focuses on the person and their story and thinks about how best to portray them holistically, not just the challenge they’re facing right now. “I try to learn who they are and how I can photograph them in a place of grace and dignity so other people can see them that way too,” she says. “It’s interesting, because one of the things I do is provide my subjects with a photo or two after I’ve taken their picture. I’ve been told it’s really transformative because they don’t see themselves that way. When you’re so depressed and when you work so hard and everything you do is a challenge, it’s hard to see yourself as that person who is beautiful and still, thoughtful and kind.

The faces in the portraits can be somewhat surprising as they resemble the people you see every day. They are young and they are old. They are black, white and they are brown. And they’re all around us with nowhere to go. Even with federal money provided as pandemic relief, affordable housing has not been readily available. As a result, people stayed in hotel rooms until something more permanent became available. And what happens when that federal money runs out? “That’s a very good question,” Thaxton said. “And that’s a question we ask ourselves all the time.”