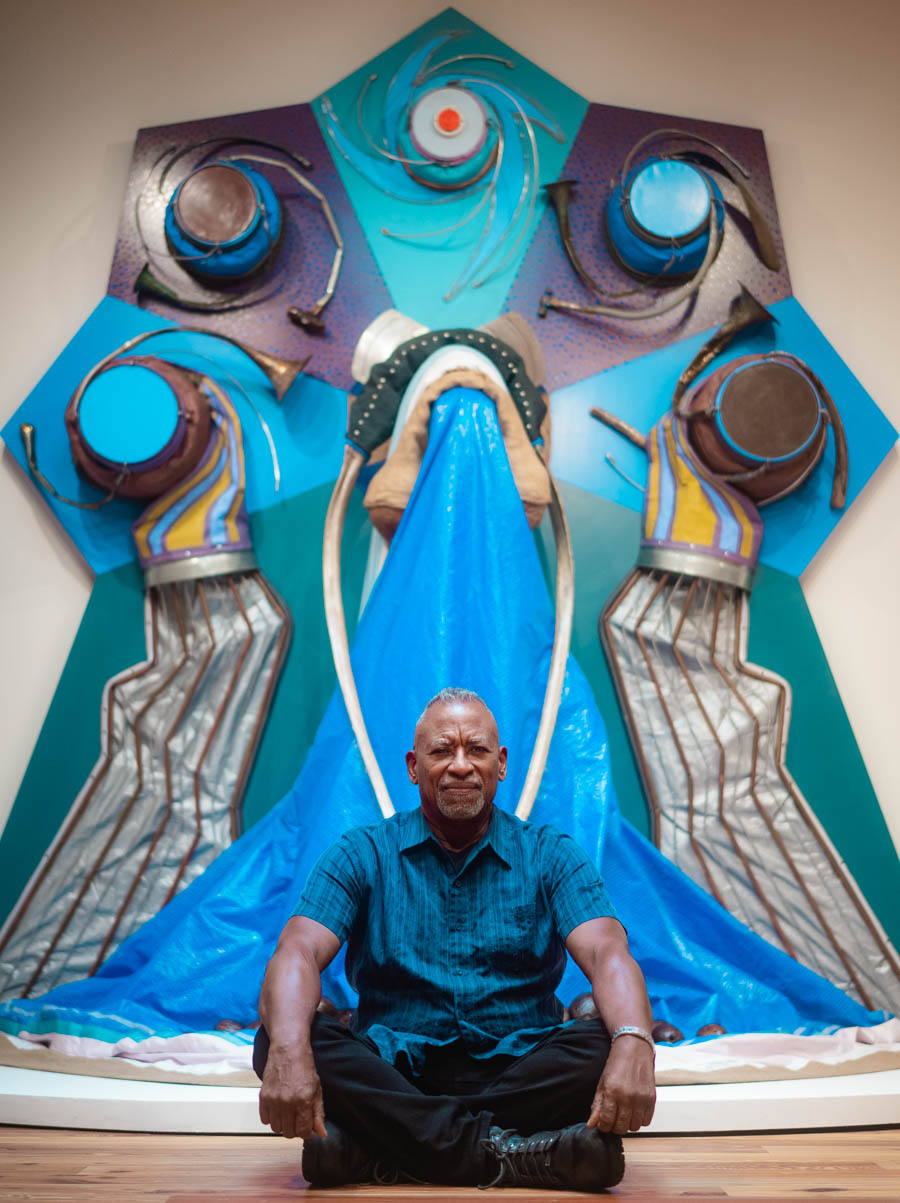 If you were asked to catalog your life into a series of objects, could you? What pieces of your childhood would you take away, what talisman could you confidently wield as an embodiment of all that you are? It’s a difficult decision, because objects, almost by nature, carry meaning. Some carry more than others. Some don’t wear them at all until they finally do. How do you make this choice? For Puerto Rican artist Daniel Lind-Ramos, that choice was made for him on September 20, 2017, when Hurricane Maria hit Puerto Rico.

It was made for him for the next 84 days without electricity, completely cut off from the outside world, while his own descended into chaos. It was made for him as he waded chest-deep through the flooded streets of his hometown of Loiza, sifting through the rubble of the storm. “In the middle of the night, when the hurricane was at its peak, we heard over the radio that people here had to leave the area because of flooding. The next morning I was wondering what my studio would look like as I waded through the water – I saw an object floating nearby and picked it up,” says Daniel. This object, a boat propeller, along with blue FEMA tarps, palm fronds and coconut shells, became the touchstones of the experience Daniel and his community had following the Hurricane Maria.

ARTIST DANIEL LIND-RAMOS USES FOUND OBJECTS TO CREATE ASSEMBLIES THAT REMEMBER THE EXPERIENCES AND SPIRIT OF HIS PUERTO RICAN COMMUNITY.

Daniel didn’t choose the objects that define him, yet he still chose to share them with us. The Tres Marias, will feature three assemblages created from natural and manufactured materials, collected in the aftermath of Hurricane Maria, that shed light on the storm’s impact on Puerto Rico. Daniel presented the series at the 2019 Whitney Biennial, along with his sculpture Maria-Maria, after which the Sarasota Museum of Art first connected with him and, in the years that followed, came to this exhibition. “At first glance, these found objects may look like miscellaneous elements that are part of a sculpture, they are meant to bring a physical presence to many experiences and memories that the majority of us have not had with the devastation. of Hurricane Maria. They beautifully create something intangible, like a memory, real in a space that we can now reflect on,” says Emory Conetta, assistant curator at the Sarasota Art Museum.

Las Tres Marias will feature an existing work, Maria de los Sustenos, in addition to two assemblages created specifically for this exhibition, Bano de Maria and Maria Guabancex. Although the exhibition was originally intended to feature only Maria de los Sustenos, the natural light and spacious layout of the museum’s Tower Gallery prompted SAM to propose the idea of ​​two additional works to Daniel. “The best part of being a contemporary museum is that we can work with living artists,” says Conetta.

Daniel, who had been thinking about these two specific works since 2018, jumped at the idea. In turn, each assemblage is constructed from different found objects and focuses on a different era of Puerto Rico – from the island’s indigenous roots and history of colonialism to its position in the modern world. Bano de Maria or Mary’s Bath is a relief that features the first object Daniel collected in the hurricane’s wake – a boat propeller, floating alongside him in the floodwaters of Loiza – at its top and a water basin at the foot of the assembly. “The water was almost above my chest when I found it,” says Daniel. The assemblage focuses on water – not just the torrential flooding of the ocean, but also on water as a pathway for the evolution of existences. Just like the majority of hurricanes that hit Puerto Rico, the majority of slaves who came to the island were also from West Africa.

The title of the book also directly implies the warming or warming of the water – with rising ocean temperatures being the main contributor to the increase in size and frequency of hurricanes. “Having just been hit by two hurricanes, Irma and Maria, I was thinking about global warming and its consequences. The name, Bano de Maria, paid homage to this: Maria – the mother of Jesus, Hurricane Maria – the destroyer and Maria the Jewess – the inventor of the bain-marie, a device used to heat water”, attests Daniel.

The other assemblage made especially for the exhibition, Maria Guabancex, is in the round and addresses both Daniel’s personal history and the island’s indigenous history with hurricanes. The title refers to the Taino deity, Guabancex, whom the Taino believed responsible for punishing them with the brutal storms. The assemblage uses palm fronds as a reference to the barraca, a type of structure where Daniel weathered storms as a young boy. Debris from rooms in his neighbor’s house – blue FEMA tarp, corrugated metal and plastic – depict the modern destructive power of hurricanes and shoes under the assembly pay homage to those who lost their lives in the hurricane Mary. “The name given by the native peoples, my earliest memories of surviving hurricanes, and the issue of houses being built and not surviving the hurricane or houses being built in places that weren’t supposed to be built, it all came into play,” says Daniel. “I wanted to use new materials and old materials to illustrate that the hurricane does not discriminate – it can destroy anything in its path.”

Maria de los Sustentos or Mary of Sustenance is another relief sculpture. This artwork commemorates how the people of Puerto Rico held on after the hurricane – how they survived, healed, and relied on each other for support. The main part of the body is made of a fishing net, as many began to catch their own fish during the power outage. “We had no electricity, we had no water, so we had to start over with the fire. We had to collect firewood, cook and fish to feed ourselves in the river,” explains Daniel. “It made us realize that we need to be with others, it’s the most important thing we can do after a disaster. I tried to build with this feeling.

The very name of the exhibition, Las Tres Marias or the Three Marys, seeks to examine another widespread aspect of Puerto Rican culture – Catholicism. The cultural identity of the Virgin Mary, long considered a figure of healing, protection and sustenance, now bears the same name as the most destructive storm in the island’s history. “Most of my neighbours, the roofs of their houses, disappeared after the hurricane. Over time, you’ve seen all their roofs covered in blue tarps – you have Maria protecting and Maria destroying. It was an interesting dichotomy. Before Maria became a hurricane, it was an image of motherhood, protection, sustenance – even after the hurricane you had both of those feelings,” says Daniel.

Perhaps by repackaging the destruction Hurricane Maria brought to his home in the form of a holy figure, Daniel can turn disaster into beauty. He can bring awareness to a tragedy, honor the past and heal his community. He can share with the world the objects that once looked like grief and chaos, but are now a symbol of his house’s resilience.