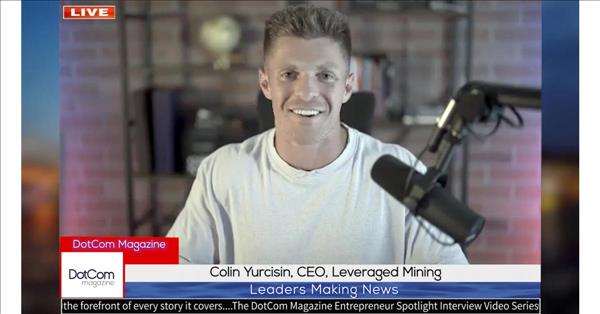 The PR issue of DotCom magazine

The Power of Zoom Interview Issue

Leveraged Mining optimizes Bitcoin Mining for clients interested in investing in their cutting-edge process. Bitcoin is powered by individual computers all over the world. Let’s work together to maintain and secure the public ledger. Leveraged Mining offers Immersion Cooling and Performance Tuning, and offers 2 amazing services to its customers: Hash Rate Packages and Ownership Packages

Bitcoin operates on a decentralized computer network or distributed ledger that tracks transactions in the cryptocurrency. As computers on the network verify and process transactions, new bitcoins are created or mined. These networked computers, or miners, process the transaction in exchange for payment in Bitcoin. Bitcoin mining is the process by which new bitcoins are brought into circulation. It is also how the network confirms new transactions and is an essential part of the maintenance and development of the blockchain ledger. “Mining” is performed using sophisticated hardware that solves an extremely complex mathematical computational problem. The first computer to find the solution to the problem receives the next block of bitcoins and the process begins again.

Colin Yurcisin and the team at Leveraged Mining have put together a compelling offer for those interested in participating in Bitcoin mining. An intriguing interview with one of the leaders of space.

Colin Yurcisin joins other top CEOs, Founders and Thought Leaders who have appeared on this informative and popular interview show. In the interview with Andy Jacob, Colin Yurcisin discusses Leveraged Mining’s latest offerings, what sets the company apart from other companies, and shares his thoughts on leadership and entrepreneurship. Colin Yurcisin joins other leaders building strong and compelling businesses who have been invited to participate in the exclusive series

Andy Jacob, CEO of DotCom Magazine said, “Colin Yurcisin’s interview was amazing. The success of Leveraged Mining is a true testament to their team and staff. It was a real honor to have Colin Yurcisin in the video series.

Andy Jacob says, “DotCom Magazine’s goal is to provide the best that entrepreneurship has to offer. We have interviewed many of the world’s leading entrepreneurs in their respective fields. It takes incredible leadership to build a company like Leveraged Mining. There are so many powerful and talented entrepreneurs around the world, and I’m extremely lucky to interview the best of the best. I always come back humbled by the number of talented people who build amazing businesses. As we travel the world looking for great entrepreneurs and businesses, it’s always a wonderful experience to meet leaders like Colin Yurcisin who are forging an incredible path for others. At DotCom Magazine, we believe that entrepreneurs are the heart of the world. We believe this is a world where risk takers are to be praised, saluted and respected. Successful entrepreneurs get up every morning and put in incredible effort. We salute the business leaders of this world like Colin Yurcisin”.

DotCom Magazine is a leading news platform featuring compelling interviews with decision makers, thought leaders and entrepreneurs. DotCom Magazine is the leader in putting people with an insatiable entrepreneurial spirit at the forefront of every story it covers. The Entrepreneur Spotlight video interview series examines business through the lens of a successful entrepreneur’s mindset. The Entrepreneur Spotlight series has included high-profile leaders, including Inc 500 founders, Ted Talk presenters, ABC Shark Tank participants, corporate-backed visionaries, prolific CEOs and founders, and many other wonderful thought leaders and entrepreneurs. DotCom Magazine covers the founders and CEOs who are making a difference. It doesn’t matter who the entrepreneur is, where they live or what they do, if it’s interesting and newsworthy, DotCom Magazine has it covered. When selecting contractors for this important video series, we consider how current the story is and what our viewers want to know. If something matters to our viewers, it matters to DotCom Magazine. The folks at DotCom Magazine believe in including a wide range of entrepreneurial voices in our interviews and actively seek out entrepreneurs who are making a positive difference in the world.

Visit us on social media: