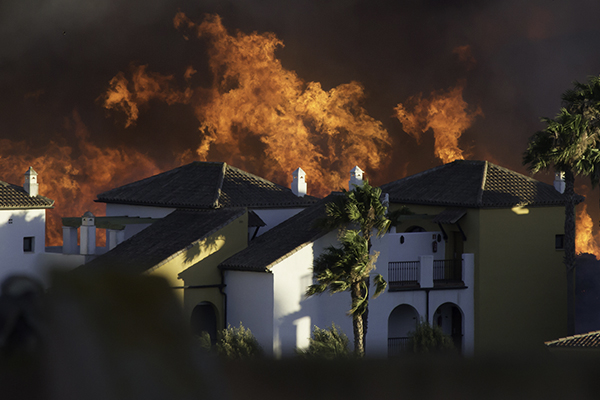 The Dixie fire in California was the largest wildfire of 2021 in the United States. It burned from July to October, consuming 963,309 acres and destroying 1,329 structures, including 600 homes. The Dixie Fire was the largest wildfire in California history, but not the largest overall. That honor goes to the August Complex Fire, so named because on August 30, 2020, four fires burned together to create a massive wildfire that consumed 1,032,648 acres, an area larger than the state of Rhode Island. One person died in each of these fires. Yet despite their scale, these fires pale in death and destruction compared to California’s Camp Fire in 2018, which killed 85 people and destroyed 18,804 buildings, or the Tubbs Fire in 2017, which killed 22 people and destroyed 5,636 buildings. And that’s only in the state of California. Although the largest and deadliest US fires of the past decade have all occurred there, notable fires have broken out in Washington (Carlton Complex Fire), Arizona (Yarnell Hill Fire), New Mexico and Arizona (Wallow Fire). In 2020 alone, more than 13 million acres were consumed and nearly 15,000 buildings were destroyed in the United States by “big event” fires (those that burn more than 1,000 acres).

While none of these are the most destructive in US history (compare to The Big Burn of 1910, a single fire that killed 87 people and consumed 3 million acres in the Northern Rockies in August 1910, or the Peshtigo Fire of 1871, which killed 2,500 people and burned 1.2 million acres in Wisconsin and northern Michigan), the incidence of wildfires increased exponentially during recent history. Although there is some debate about whether the total number of wildfires has increased, there is little debate about whether the intensity, area consumed by, and cost of rebuilding to from forest fires have increased. According to NASA, which tracks wildfire activity by satellite, the average annual number of acres burned has steadily increased since 1950, and the number of “megafires” (fires that burn more than 100,000 acres ) has increased over the past two decades.

All of this has profoundly influenced wildfire safety policy in the United States. Traditionally, the recommendation to protect houses was to create a “defensive space” – an area of ​​landscaping with few combustible materials around a house – so that fires had no chance of reaching the building. (Note: The specific zones that define “defensible space” around a home vary. The illustration at left details the three zones that are generally recommended primarily outside of California. The California building code has a definition more stringent which includes a combustible-free zone that extends 30 feet around the house, a zone of low, overgrown vegetation extending 30 to 70 feet, and a reduced fuel zone of 70 feet at the boundary. of ownership. These stricter requirements have also been adopted outside of California, although not as frequently as those shown on the opposite page.)

While defensible space is still a primary strategy for protecting homes, it has proven to be less effective for two reasons: The first is the increased concentration of homes in developments. Smaller lots mean houses often don’t have enough space to create much defensible space around them. Second, the increase in the intensity of wildfires has made blowing embers, which can travel distances measured in kilometers, a primary cause of building fire ignition. The main strategy these days is to harden houses to resist damage.