Chatt Mag DISCOVER THE ART OF PUBLISHING
Home Magazine article A Wayfarer’s Stop – At The Tablr :: Article from SRQ magazine by Andrew Fabian 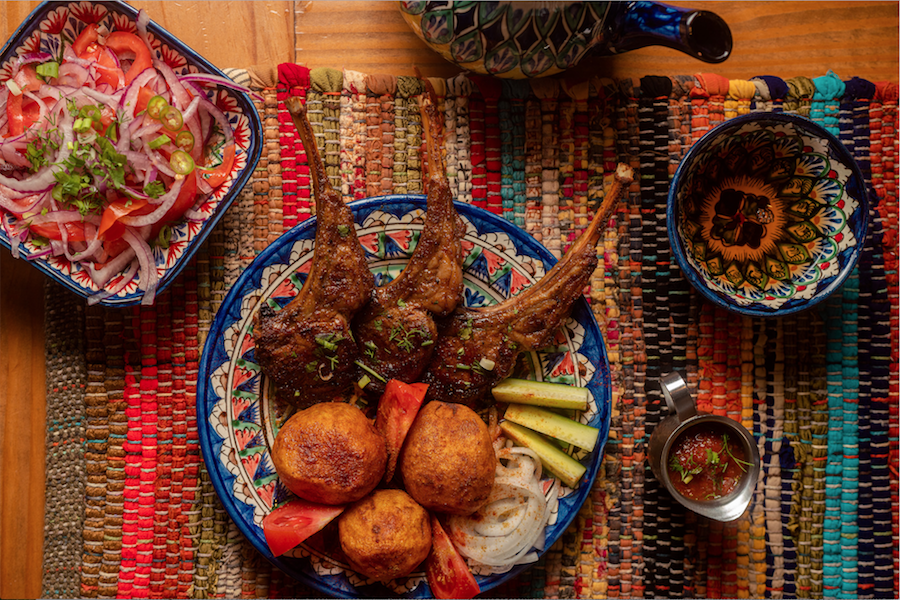 A strong breeze blows snow on the dirt road from Tashkent to Samarkand. Silk merchants pull up their hoods and brace themselves for the cold, leaning heavily on their sticks as they approach a tea room adorned with tall columns on its porch that ends in carved wooden arches . They seek shelter, rest and food. A warm glow from the inside promises everything. They enter, and as the door closes behind them, the roar of the wind is replaced by the sounds of a ballad in Russian sung by a drunk, pot-bellied man in a karaoke machine. It’s 2021, man, and you can’t trade silk for soup anymore.

MARINATED AND SEIZED TO PERFECTION, THE LAMB CHICKS HAVE A LOT OF FLAVOR. PHOTO BY WYATT KOSTYGAN

But at Chayhana Vostok, which means “oriental tea house” in Russian, the spirit of the Old World trade routes exists just below the surface of its modern comforts and, yes, next to the occasional karaoke night. Located on Tamiami Trail just south of the Walt Fish Market, the Uzbek restaurant offers all the hearty, meat-rich dishes of the landlocked nation that has become one of the former Soviet Union’s most beloved cuisines. A long history of breeding and breeding, as well as the strong cereal production of the region, infuse the soups on the menu, various grilled meats and wheat-based specialties. Among the wheat-based specialties, few foods define a cuisine like bread. Lepeshka is a variety of flatbread baked in the same way as Indian naan, but with a more bagel-like appearance and shape. Owner-operator Rustam Lyukhay fully prepares the dough for his restaurant’s lepeshka and makes it to order. The top of the bread is stamped in the center with a pattern, then glazed and sprinkled with sesame seeds, resulting in warm, chewy bread worthy of weary travelers.

REVIVING THE SENSES WITH CUMIN AND COLOR, CHAYHANA VOSTOK PILAF IS FILLING AND FLAVOR. PHOTO BY WYATT KOSTYGAN

Samsas and manty, two other grain-based foods, are also on the menu. The first consists of oven-baked phyllo pasta stuffed with beef, onions and spices, much like a Cuban pastelito stuffed with meat but tasty and earthy with cumin and cilantro. The experience of a warm, flavorful stuffing inside a flaky, crispy exterior is a joy that’s hard to define. Unlike samsas, which are offered as a starter, manty serves as a main course. The four large steamed meatballs are stuffed with ground lamb and onions, with sour cream served in a ramekin in the middle for dipping. Like the manty, the restaurant’s soups provide enough nourishment to withstand the rough road west of Byzantium. Lagman Soup celebrates the country’s rich noodle diet with homemade noodles while lamb and vegetables add something interesting and familiar, respectively. A shurpa soup, however, takes the rich, earthy flavor of lamb and concentrates it in a broth so rich, diners might wonder if Lyukhay is keeping the cattle away for the freshest flavor. The melted fat from the lamb chops thickens the broth superbly, while the coarsely chopped carrot and potato chunks add starch and a touch of sweetness. Finally, chopped dill and coriander crown the silky and thick dish from which the chops protrude from the bone.

ACCOMPANIED WITH FRESHLY BAKED LEPESHKA (FLAT BREAD), SHURPA SOUP IS AS HEART AS A STARTER. PHOTO BY WYATT KOSTYGAN

And fear not, hungry traveler, for now we come to the meat. As shurpa and lagman soups suggest, Uzbekistan loves its lamb (or sheep, to be exact). A traditional Uzbek pilaf, which is usually reserved for special occasions, comes in the form of a perfect mound, with tender pieces of pulled lamb on rice mixed with grated carrots, onions and a good dose of cumin. Almost as aromatic as burning incense, the meal begins at the first scent in a very real sense, as if the preparation is designed to float in a busy artery looking for empty stomachs. An assortment of shashlik (skewers) provides a simple dose of protein for meat lovers while a chicken tabaka features whole butterfly chicken lovingly seared in butter and topped with dill and cilantro. But the lamb chop dish is from another world. There is something tangy about the marinade that the sweet-spoken Lyukhay doesn’t disclose, but only citrus or rice vinegar seems like reasonable guesswork for meat bursting with flavor so bursting that no taste buds are turned off. It has pizzazz and edge while retaining the slight gaminess of the lamb. While it certainly helps that the final dish is also sprinkled with a little paprika, cumin, and cilantro, these spices hardly explain the juicy interior of the meat.

At this point, the beauty of the Uzbek tableware should be noted. Few cultures still produce more colorful and detailed bowls, plates and platters for everyday use. A pot of tea – a drink as important to Uzbek culture as water is to its agriculture – is served in a beautiful kettle that appears to come straight from a craftsman’s shop in Tashkent. Served in an equally ornate piala (handle-less teacup), any Uzbek meal begins and ends with tea, a sweet blend of black and green tea, served sugar-free in the case of Chayhana Vostok.

As for karaoke evenings, you will have to follow the restaurant’s social media pages and know how to read Cyrillic characters.